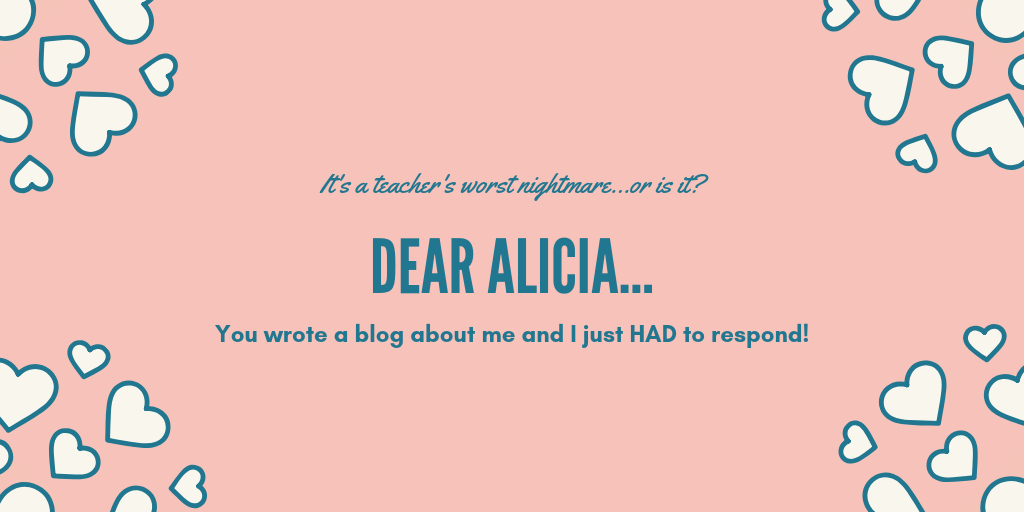 It was the kind of message every teacher fears…

“Hey Miss, a student has written a blog about you!”

Cue instant panic, sweaty palms, imagined gauntlets being thrown…An ex-students message had been languishing in my inbox the night before, warning me of this, this, catastrophe, so by now this thing had probably gone VIRAL!

It was probably an expose featuring a close-up photo of that time my zipper was undone and I didn’t realise until Period 6. Maybe, if I was lucky, it was a series of photos of me struggling with technology. A mad woman, muttering at the overhead projector to “PLEASE do not do this today. Not today.” Or clutching my USB cord lamenting “WHY?! You were working 5 minutes ago!”

It was likely an audio recording of one of my patented ‘Aunty M’ style lectures, in which, I deviated from the curriculum for a brief second to remind students of the importance of them being ‘decent human beings.’

And if I was truly, truly blessed, perhaps the blog featured video footage of the  time I accidentally played an inappropriate youtube clip to my Year 9 class (before I realised that youtube videos had ‘clean’ and well…’unclean’ versions of videos)…There was no telling!

You see, teachers today face a different kind of public scrutiny than they did years ago, when the most a student could ever do was to tell you to…

Nowadays, talk about teachers is ever present. We feature on facebook posts, infiltrate Instagram, rack up points on ‘Rate My Teacher’ and sometimes….If we are super duper lucky….

But this time was different.

I read the student’s post. And it was a game changer for me. I had to respond.

It was written by an ex-student, named Alicia McFadden. I fondly recalled her as a sassy, gumption-filled lass who didn’t mince her words.

Or see the highlights (for me, anyway, bwaha) below:

So Alicia, this one’s for you baby doll.

I recently read your blog post, “Where are you going with this,” with great trepidation, as I had heard I featured quite heavily in it. As you can imagine, many posts written about teachers are…not so nice.

Having read it, I want to thank you, firstly for portraying me so flatteringly, pictorially. I’ll have you know, contrarily to what you may think, I am SO OLD and DAGGY that I don’t even know WHO this hot tamale is?!

I do know that she’s a significantly upgraded physical specimen!

I feel sufficiently humbled and eternally proud that I have in some way inspired you towards a career direction you feel pumped to pursue. But I can’t take credit for the force that is Alicia Mac!

The Alicia I remember terrified her opposition in class debates with her quick wit and sassy tongue. She owned her space and delivered some of the most compelling spoken texts I’ve been fortunate enough to hear in my career.

She penned heartbreaking and often disturbing narratives that were shared as class exemplars all the while remaining ever-critical of her work, unaware of the whispers of her classmates saying, “wish I could write stuff like this!”

She co-created and starred in the greatest recreation of the ‘Mean Girls’ hallway walk that I’ve ever seen.

NOTE TO STUDENTS:  I keep this stuff on file.

Alicia, your blog arrived right at the perfect time for me. You see, I am embarking upon building my own empire, and there are days when it all seems too hard. Days when it would be easier to pack it in and return to my day job.

I AM A BOSS GIRL!

And as for you, I am watching this space, girlfriend. I think you are destined to do BIG. THINGS. Not because I was your teacher, but because (to borrow a metaphor from John Green, in ‘The Fault in our Stars’) I think…

“YOU are a tornado, ready to explode!”

And that explosion, my friends, is going to be a spectacular success.

I’ve got my popcorn out and can’t wait to watch it all unfold.

Now get on out there and run the world!

PS: I had my awkward stage alright. I am still in it!

PPS: Here is a video version of my letter, delivered at CCA Studio, with love.