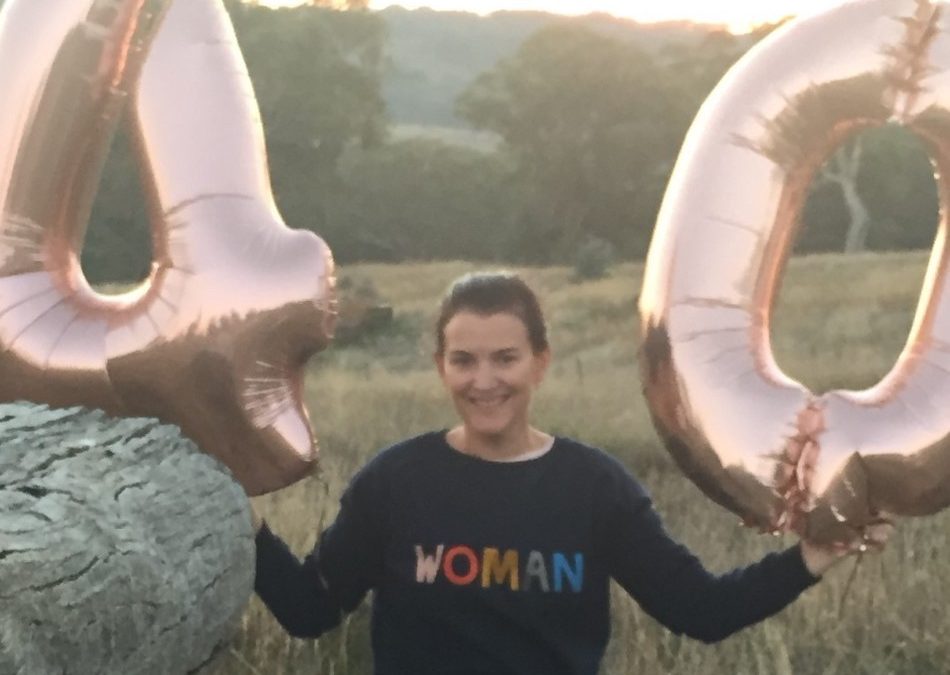 I want to tell you that it was easy. That I sailed on into the milestone unfazed and then emerged looking flawless and fabulous. Clasping a mojito, with Beyonce hair fan in full effect, as I lay seductively on top of a piano, singing a sultry tune. Are you channelling Carrie from ‘Sex and The City’ yet?

But y’all…in all seriousness, it’s been ROUGH!

I’ve been keeping busy, launching a business and participating in a musical…IN MY BATHING SUIT (clearly more needed on this later), raising two cherubs and being a wife.

However, in the back of my mind, there’s been a nagging little voice, reminding me that the end of my 30’s is nigh. That it is approaching at breakneck speed, like the pap smear appointment I know is inevitable, but dread…just the same.

Truth is…I still feel about 22. Shocking. I know. When I go for a run, I push myself like I did when I was a 17-year-old collegiate tennis player. When I get dressed, while I avoid the hoochie mama stylings of my youth, I walk determinedly past ‘mumsy’ clothing stores, in favour of those that stock fun and frisky pieces (that I regularly see 20 somethings rocking).

When I look at my greatest achievements (my gorgeous offspring), I wonder how they came to be so old, while I have remained so young??? I know there are more of us out there. Youngsters trapped in a number.

Had I gone to an effort to look glam at my 40th? Sure.

Did I purposely time my haircut (so I may or may not have been able to get my hair GHD’d?) Guilty. Thanks Em, you rock!

Had I purchased a new frock? Totally.

Did this make me a vacuous, shallow human being? Maybe?!

Even more alarming, though, were the comments of support from my friends and family (whom I adore).

“You’ve still got it Peita”

“Looking just as fabulous as always”

“Still as young and as beautiful as ever”

In fact, nearly half of the comments were phrased to reassure me that I wasn’t looking old and haggard…

And you know what? This is EXACTLY the way I comment when my gal pals have a birthday. Interestingly, a cursory flick through my comments on my MALE friends’ birthdays reveal the odd “ageing like a fine wine, my brother” type comments. But mostly, I am just wishing them well on their birthday.

So what have these musings led to?

Weirdly, utter acceptance and pride in my age.

It’s sad we live in a world where women are held to different standards than men. Men (like my husband) go grey and women swoon. Women get replaced by the younger version (check out the evening news and the disparity between the male anchor’s age and the female anchor’s age for clarity). Once fine lines start developing they graduate to infomercials.

But, this body is still in pretty good nick. It still downward dog’s with aplomb. It runs swiftly. It birthed two incredible children.

More importantly, this MIND copes with a gazillion tabs constantly open. It tells me to never dull my sparkle for anyone else’s benefit. It reads with the same hunger it did as a ravenous tween in a cupboard with a flashlight after lights out. It urges me to lurk dangerously outside my comfort zone…

In fact, ageing is the ONLY catalyst that sits me on my ass and FORCES me to stop and smell the roses.

I am determined to be…one badass mother!

Fellow cookies, I advise you to do the same!